This tale begins with a hint of eros and a spark of inspiration. We could attribute it to wine, but a steady diet of oysters on the half shell is also known to bring on such heightened states of awareness.

Bruce Schmaltz, our follied protagonist and a Don Quixote of sorts, was travelling from the grasslands of Alberta in late 2013, seeking adventure.  And oysters. On his first encounter with the Raven Lady, he was transfixed by her strength and beauty.  Recognizing the latent power of the Raven Lady and having duly received the message, he made it his mission to unlock her hidden secrets. 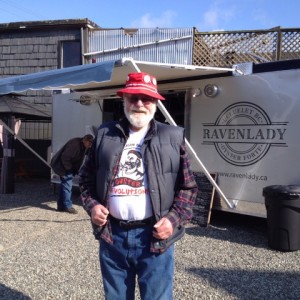 For Bruce, a knee-jerk reaction suggested expediting her back to the prairies, but the courting of this lady would prove to be more complicated (it usually is). Not the least because the 12-foot span of her curvaceous form is entirely comprised of stainless steel. So what was the real crux of the matter?  It turns out she simply would not be parted from her home on atop the hill, overlooking coastal waters.

For a fool in love, the only solution was to stay, so that’s just what he did.  And having succeeded in courting the belle, a revitalization project commenced at the current location without haste, along with visions of a community space supporting creativity, dialogue, and good food.

What followed was a revitalization of the square on Peninsula, during which time Bruce had concocted a notion that freshly shucked oysters were essential for initiating visitors to the site.  Escalading plans included an upscale food truck on site, and a chef with the capacity for conjuring magic.

In March of 2015, RAVENLADY Oyster Forte opened for business, with a red seal chef at the helm of a newly minted, state-of-the-art food trailer, showcasing a bold and provocative menu focused exclusively on the pacific oyster.

It was no small victory for our blundering protagonists, who fittingly inaugurated the site on April 1st – the day of Fools.  Visitors were greeted with menu samples and mythical exegeses weaving the fabrics of Eros and Oysters into one.

For Bruce and his wife Monique, the inauguration was an occasion to celebrate the human journey, rebirth, and the zest for life.  It was also an opportunity to pay forward the call to adventure: to stand before the mighty Raven Lady and slurp down a freshly shucked oyster is to be initiated into future worlds of one’s own making.

The stage is now set, and we invite you to visit us and participate in creating the RAVENLADY story – we’d love to hear from you!