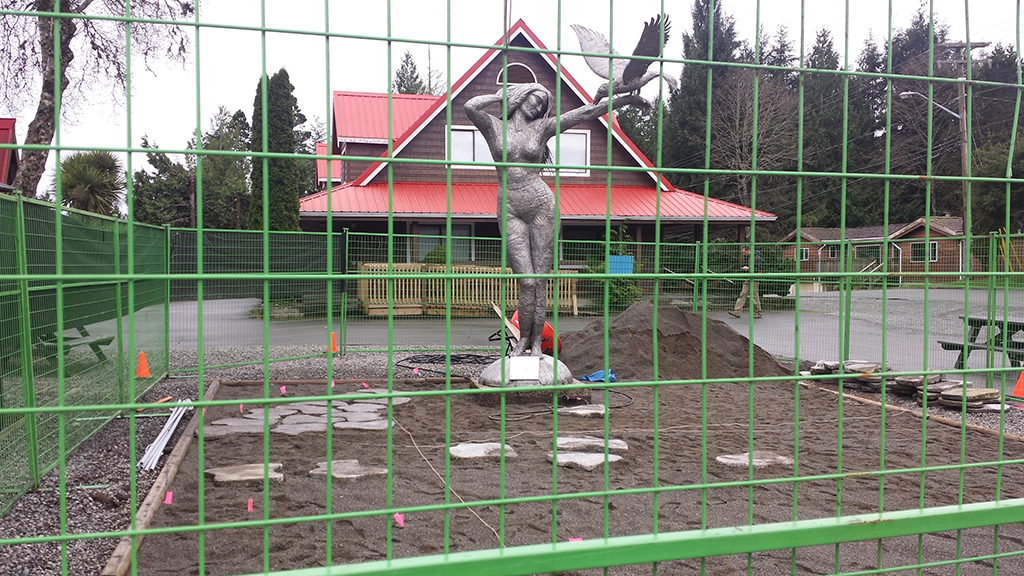 In a small town on the most western edge of Vancouver Island lies a sleeping beauty.  Her name is RavenLady, and for the last two decades she’s slept in plain sight right at the top of our little coastal town.

Nothing goes unnoticed in Ucluelet, especially during the winter season when town is left to the locals after all the summer vacationers and adventure seekers have gone home (or, have moved on).  One can only imagine the curiosity and buzz circling around our RavenLady when an Old Fool came to town (a.k.a Bruce Schmaltz) out of the blue, to shake things up around her and to awaken a sleeping legend.

When I think about the updates and construction happening around our RavenLady, it reminds me of the time when a woman needs to get ready, spruce herself up for the upcoming season, for her first real stage appearance.  The work around her has been moving along steadily and is now in it’s final stages.

With the help of local contractors, namely Reg’s Roots Landscaping the space around the RavenLady is literally transforming into a stage whereupon she is the only star.

Every star needs a supporting cast and for 13 years, Jigger’s (Fish & Chips) has been just that.  Rated #2 on Tripadvisor and well known and loved by locals and visitors (from all over the world), we are happy to announce they will be staying on board with this new venture.

Shane Greer and Shelly Fader, born and bred Uclutians and owners of the wildly successful food truck say they’re both really excited to join forces with Bruce in his quest to unlock the mysteries surrounding the RavenLady, all the while, continuing to offer visitors the chance to taste the plentiful (and delicious) delights of the sea.

“The RavenLady is, and has been a focal point in town and creates a cool place for everyone to gather and meet”, said Fader.  “She’s been more than just a conversation piece for visitors and locals alike, she’s been a friend for everyone wanting to stop and chat with her and around her.  I see Bruce’s vision and he’s creating such a happy space for everyone and we’re happy to remain a part of it.”

So, what’s the plan?  What’s going on here?  These are the questions at the top of everyone’s mind and I’m here to fill you in.

Back in February, Bruce Schmaltz submitted his plans to Ucluelet’s town council for approval.  Along with the revamping of the space surrounding the RavenLady, Bruce will be bringing in a brand new, state-of-the-art food truck to sit alongside Jigger’s and offer a unique and original menu not seen anywhere on the coast before now. 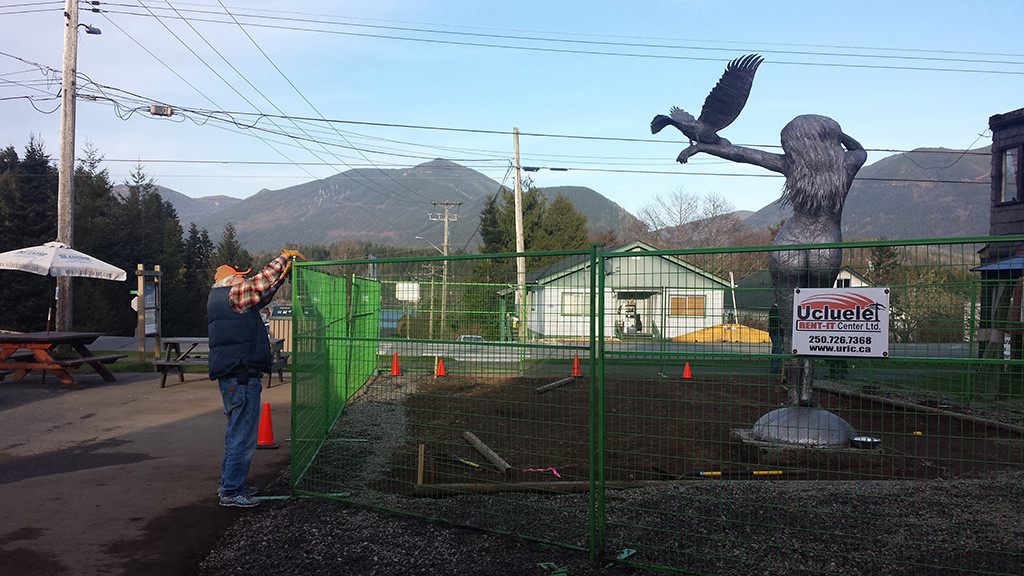 Nerves were on edge in the town council meeting where the fate of the Old Fool’s venture sat in the hands of strangers.  After what seemed like forever, sitting and waiting for an answer (council meetings are dreadfully boring), anxious nerves quickly turned into excited smiles and hushed handshakes of congratulations when council voted unanimously to allow our adventure-seeking protagonist to carry on his quest.

Naturally, this came as a great relief as the Old Fool had already commissioned the trailer to be built and work was well under way.  He also had a red-seal chef waiting on the sidelines and quietly developing the menu for this new business.

I caught up with councillor Sally Mole some time after the meeting and asked her how council had come to such a quick and unanimous decision regarding the new construction and food truck on the main drag in Ukee.

“We’ve had discussions on revitalizing the main strip and so that just fell into the strategic planning we already had for the focus on Peninsula [Street] and also, more variety of foods is another thing we are extremely supportive of and that just fit right in there.”

Are you curious about the food yet?  Good.  You should be.  All I can tell you right now is that RavenLady’s venture into the culinary realm has been focusing on perfecting one thing only.  Oysters.  Delicious, fresh and extremely hard to come by unless you’re right here on the wild west coast.  A red-seal chef is currently developing the menu and has agreed to meet with me this week for a sneak peak at what will be coming soon to a tummy near you.

In the meantime, I’ll show you a behind the scenes look at the new food truck being built and soon to be parked next to Jigger’s behind the RavenLady making her supporting cast in the grand opening complete.